Review: The Tombs by Deborah Schaumberg

Blurb:  New York, 1882. A dark, forbidding city, and no place for a girl with unexplainable powers.

How I’d Describe This Book To a Friend

Okay, so there’s this girl named Avery Kohl. She is 16, but she talks like she’s 56 because of her Tragic Backstory. Avery’s mother got taken away by these creepy guys in black crow-like plague doctor masks and taken to the basement of this prison known as The Tombs, where there is an asylum. Avery’s father is an alcoholic, likely coping with the fact that when his wife was taken from him he had to move with Avery to a slummy part of New York because they could no longer afford their previous lifestyle. What was their previous lifestyle? I’m not 100% sure, but I know Avery once had girlfriends and nice dresses and a horse.

This book is about Avery overcoming obstacles, trying to find her mom, and somehow managing to stumble into a love triangle without actually really knowing one of the two guys, like, at all. She is fairly badass, and works at a steel mill with a bunch of largely forgettable people minus this one kid named Geeno. The unfortunate thing about Geeno is that I can only picture the puppet man from Super Mario RPG: 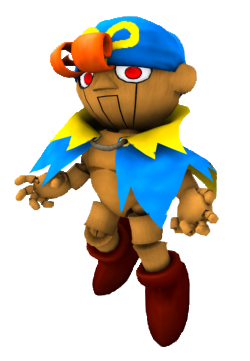 I’ll save you, Avery!

Anyway, Geeno is nice and he trains bugs to do things for him or something? I’m not really sure. He speaks weirdly fragmented English but not consistently enough for me to understand what is going on in his magical nine year old brain. Also, he is a puppet from Super Mario RPG, so there’s that.

Here There Be Spoilers

I am hella torn on how I feel about this book. On one hand, it is not the kind of book I’d normally pick up on my own. However it was the book that came with my February Once Upon a Book Club box, so I swallowed my pride, shrugged, and cracked it open. It helps that OUABC books coming with little gifts to open, and in my case they were rewards for me to keep reading because I wanted to know what was going to happen next, and what gift that would relate to. Yes, I am shameless.

The Tombs started out interesting enough. I enjoyed getting to know Avery and her job in the mill, her father grated my nerves a little but it was understandable that he’d be the way he is after what happened to his wife. I was intrigued by Avery’s breaking into the Tombs to see her mother, and I really enjoyed seeing how her powers worked: she has the ability to see the auras of people whose actions are malleable, and if she plays her cards right, she can spur them on to change their demeanor and therefore, their actions. The pace was a good clip. The villain, Dr. Spector, was suitably scary. The whole thing was great … and then Avery found out about the Gypsy camp and it all went to crap.

Avery has two love interests. Khan, a young African-American gentleman her father rescued while part of the war efforts, who she has grown up with and loved for years. He can blend in with walls or something, they never really make it clear but twice during this book Khan just sort of melds with a wall and nobody notices him. I have no idea what that’s about. Avery and Khan share a solid friendship and I really enjoyed watching them get to know each other better as adults, or near-adults. They held hands, they kissed tentatively. It was sweet and demure and realistic. Avery learned to throw knives, and to harness her powers and really see with her aura. She was beasting out, and I was rooting for her. And then heckin’ Indigo showed up.

Apparently, Avery met a young Gypsy fellow named Indigo many moons ago when she was thirteen. She kissed him at a party at the Gypsy camp, and when she went back the next day per his request, he was gone. This made her inconsolably sad and she wept all over poor friend-zoned Khan about it. I am not totally sure how much time she spent with Indigo, but let’s put it this way: she didn’t even know his name until three years after this ill-fated kiss. She eventually finds Indigo while she is imprisoned in the Tombs herself. He is training rats to do his bidding with his powers, and painting wall murals like he lives in a Mellow Mushroom. She pours sulfuric acid on his restraints and somehow nobody gets hurt (???) and they get out with the help of this kooky old man who lives near the roof who had a pet parrot named Pepper once. Pepper is the real victim here. What happened to her? Justice for Pepper.

At one point near the end of the book, while waiting for Indigo to find his way to safety, Avery thinks to herself: Indigo is my soulmate. This girl has spent maybe five hours with him in sum total, and for at least three of those he was chained to the floor like a shackled animal. How is he your soulmate? You kissed once. Meanwhile poor Khan is over there doing backflips and saving your entire family and Geeno is training your pet falcon to do cool stuff and all you care about is this boy you barely know who is the same name as the world’s most undervalued rainbow color.

I have the nagging, gut feeling – call it an aura sense – that there will be a sequel, because this ending felt like a duology. Would I read a part two? I don’t know, possibly. I enjoyed the gifts in the OUABC box, and this book has such a unique vibe and plot concept – but it got a little too bogged down in the “this is YA, gotta add a love triangle!” aspect for me to give it 4 stars.

Review: Little Do We Know by Tamara Ireland Stone

Review: Not If I Save You First by Ally Carter